Following many requests from protection manufacturers Efectis decided, in the context of its development, to extend its services within the oil and gas sector by offering jet fire testing. The ISO 22899-1 jet fire testing method provides an indication of how passive fire protection materials perform in the event of a jet fire, which may occur in locations such as petrochemical  installations.

Jet fires give rise to high convective and radiative heat fluxes as well as high erosive forces. To generate sufficient quantities of both types of heat flux, a 0.3 kg/s (i.e. 1080 kg/hr) sonic flow of gas is released into a shallow chamber, producing a fireball with an extended tail.
The test facility developed by Efectis to provide such a service requires advanced technology and know-how in order to manage the high flow and the pressure of gaseous propane.

At the end of August, Efectis performed two calibration tests in its jet fire facility at Les Avenières site. The second test was carried out in the presence of a third party (Lloyd’s Register) and lasted two hours.

In June and October 2014, Efectis organised technical days in order to present and explain to manufacturers  of protection systems and representatives from the oil and gas sector the different levels of testing for the various activities (hydrocarbon, jet fire and blast testing). Since September, the first commercial jet fire tests are successfully carried out in accordance with the ISO 22899-1:2007 standard. 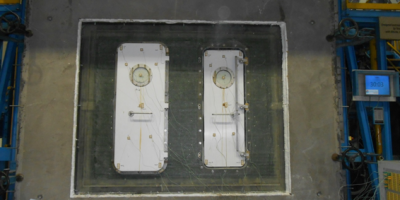 Fire test of a watertight door construction in a polyester bulkhead according to IMO, FTP Code 2010, part 11 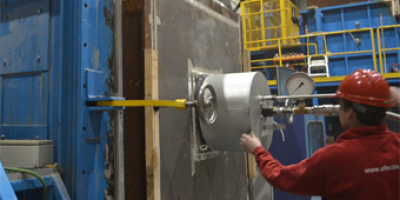