The renovated central station in Den Haag (NL) was opened in early 2016. One of its striking features is the glass roof, incorporating a large number of smoke vents that open automatically in case of fire, allowing smoke and heat to escape and people to evacuate the station concourse, and improve the fire fighting conditions.

The smoke vents are opened automatically by a detection system of linear smoke alarms (beams) comprising a transmitter and a receiver mounted at a large distance from one another. The area in between is monitored for smoke particles and refraction measurements. This detection method is well suited to long high areas like the station concourse.

To check that the system is working properly, ProRail asked Efectis to design and execute a fire test simulating a fire in a train in the station. Based on the specification from Prorail, a fire development was modelled for 20 minutes with a maximum heat release of 40 MW. It is essential that the fire is detected, the fire service is alerted and the smoke vents open automatically well within that time. The test fire simulates the first minutes of a developing train fire.

Three steel fire trays containing a layer of N-Heptane were set up on one of the platforms. A minimum power of over 1 MW is needed for the fumes to reach the roof over 20 metres above.

During the test Efectis achieved a gradual increase in power by filling trays 1 to 3 with enough fuel for three minutes, two minutes and one minute respectively. The trays were ignited at one-minute intervals.

The maximum power generated was 1.67 MW, approximating fire development over a period of 3 minutes and 13 seconds. This test format was approved by the parties beforehand; if the detection system failed to activate within three minutes after tray 1 was ignited, this would be considered a failure.

Early on 1 July 2016, with no one else in the station, the test could be carried out safely in the presence of representatives of the municipality of Den Haag, the contractor ProRail, the external certifying body.

The trays were filled with N-Heptane and ignited as planned. After 2 minutes and 35 seconds the smoke vents in the roof of the station concourse opened, just after three beams were activated by smoke from the fires. The detection system was operating correctly. 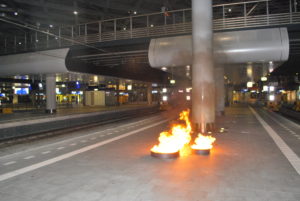 See more
17.5.2021 External Thermal Insulation Composite Systems - ETICS External Thermal Insulation Composite Systems (ETICS), applied to the facades of buildings and also known as Thermal Insulation Package System, are subject to the Construction Products Regulation (CPR,... Read more
20.4.2021 News from the board I hope this newsletter finds you well and in good health. Despite all the restrictions deriving from COVID-19, Efectis Nederland B.V. started 2021 with the acquisition of KRID... Read more
20.4.2021 Development of a European approach to assessing the fire performance of facades – Evaluation of the fuel source Efectis has recently carried out a series of tests to evaluate the fuel source to develop a method harmonized at European level to assess the fire performance of... Read more