As I write to you, a fire has just occurred in Paris with three fatalities and twenty-seven injuries. Our thoughts go to the families of those concerned!

During the first half of 2019, several large fires occurred in different parts of the world. There were major fires involving the wooden facades of buildings (London, Draguignan) or combustible, non-fire-retardant cladding (Dhaka), residential buildings with multiple fatalities (Dhaka, India, Paris), buildings under construction (Iowa City, Tokyo) and recently Notre Dame Cathedral in Paris. And as summer begins in the Northern Hemisphere, it is impossible to avoid mentioning forest fires that occur every year in India and with increasing severity.

Construction schedules are getting shorter and the designs are becoming more complex, so enforcement is a key issue. Enforcement is efficient when third-party control is applied in all phases: fire performance of products (testing, factory production control, certification), verification of design based on prescriptive rules including science-based justification of deviation, validation of assessments, fire engineering based design, control of installation (on site and by certified installers) including the assessment of testing deviation, and the commissioning of the buildings (with integration tests and verification of the human role).

The growth of fire kinetics, the increase in fire propagation inside and outside, the forest wildfires and their urban interfaces, the use of technologies in fire prevention, the human behaviour of occupants, as well as how the fire is managed in the early minutes, make the fire much harder to read for the firefighters, who adapt their firefighting strategy in each case.

The aim of limiting the impact of fires involves the development of rules for actors in the construction field, rules for enforcement by third parties and new fire research that has short-term objectives.

Efectis is working with regulatory bodies, standardisation bodies, firefighters’ departments and actors in the construction field to adapt the rules to the current construction world.
Efectis is hosting (at Efectis UK/Ireland, Belfast) the International Forum of Fire Research Directors, which contributes to the organisation of fire research.

Efectis is your partner in better global fire safety. 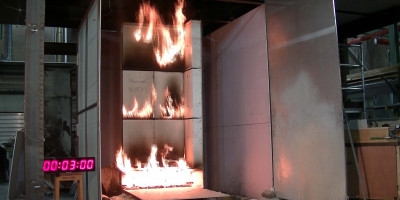