These numbers exceed the maximum allowed surfaces as laid down in French regulations for such warehouses. For building projects, a fire safety engineering study should be given to the authorities to prove the design’s safety level for occupants, firefighters and the neighborhood. This is exactly what Efectis has done. During the project, Efectis carried out a combination of experimental and numerical assessments. These were used to evaluate the heat flux from large fires, fire and smoke propagation, thermal transfer to structural elements, roof or partition, structural behavior of concrete and steel at high temperatures and egress conditions. On the basis of these experiments, Efectis developed a structural design and a compartmentalized design for walls, roofs and equipment. An overall design for the building’s neighborhood was also created.

The requested fire safety level was discussed and agreed upon with several competent authorities.
Experiments at the laboratory of Maizières-Lès-Metz (France) were carried out to assess the thermal behavior of the roof and façade under non-standard thermal impact. A fire lasting more than six hours was performed to assess quasi steady state conditions of a long lasting storage fire.

The fire safety engineering study investigated the functioning of several combined safety features: active measures (sprinklers), adapted structural design, high performance compartment walls and the effectiveness of specifically designed equipment like vents and doors.
This was not all: Emergency response capabilities were also taken into account. These include the proximity of the fire department, availability of water, accessibility of the premises.

This complete approach has led to a design for a one of a kind storage facility, providing a satisfactory fire safety level. The protective and preventive means are all adapted to the objectives defined beforehand. Thanks to this, the project can serve as a case study in France. This goes for the methodology that was developed along with the designs of the building components. 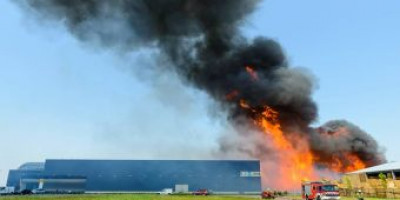 Fire spread between a pallet stack and a neighbouring building