Two projects involving 29 large scale fire tests were carried out by Efectis in the full-scale facility of our partner “Tunnel Safety Testing” (Gijon, Spain).
The main objective of both test programs was to investigate the effect of two different water-based suppression systems on fire development and the consequences of this in road tunnels.
These projects, involving fire experts from across the Efectis Group, demonstrate Efectis’ high level of capabilities and its positioning as a worldwide leader in Tunnel Fire Safety.

Deluge systems are regularly used as a fire suppression system in road tunnels in Japan, Australia or Singapore. However, as there was not much data available on the performance of these systems, the Singapore Land Transport Authority (LTA) has created the “Fire Test Program for Road Tunnels with Fire Suppression” and commissioned Efectis to carry out this research program. In addition to a series of laboratory fire tests, a series of fire tests for road tunnels with and without fire suppression systems was conducted.

The purpose of the research program was to explore the possibilities and benefits of a water-based fire suppression system. The following topics were specifically addressed:

A tunnel section with a width and height of 5m was created inside the laboratory to investigate the design parameters of the deluge system and the test setup in a controlled environment, in order to optimize the test program for the limited number of available full scale tests of the second phase. Over one week, 11 fire tests were carried out and a vast amount of data was collected for analysis.

For the second phase, Efectis adapted the full scale test tunnel at TST, using a width of almost 10m and a length of 600m, into a fire test laboratory by mounting over 150 sensors into the tunnel to measure temperature, visibility, air velocity and concentration. To investigate the deluge suppression system, two sections were mounted into the tunnel as well. For each of the seven fire tests, the fire load consisted of 228 wooden and plastic pallets covered by metal sheets on the top and plastic tarpaulin on the sides, representing the covered load of a truck. In six of the fire tests, parameters of the suppression system such as nozzle type, water density and activation time were varied. In the seventh control test unsuppressed fire development was observed.

The project has been completed and the results are being published through conference presentations and scientific papers. The results of the project are particularly important for the design of tunnel fire safety strategies and systems in tunnel projects.

The project for LTA Singapore was carried out by an international Efectis team, which was from France, Spain, and the Netherlands with subcontractors and suppliers from the Netherlands, France, Luxemburg, Austria, and Spain. 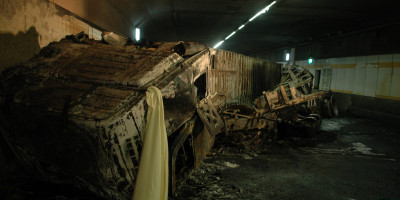 Truck fire in the Heinenoordtunnel 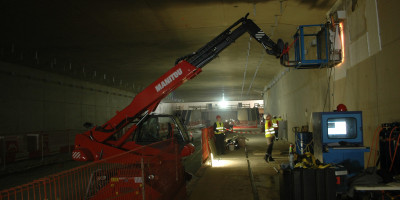 Fire Safety in the North/South line