Fire testing of the structural integrity of a tunnel is usually performed before the tunnel is constructed. If you want to know how an existing tunnel would behave during a fire, you need to perform an on-site test with the mobifire.

Efectis carried out such an on-site test in the spring of 2016 in the Louis-Hippolyte Lafontaine Bridge–Tunnel in Montreal, Canada. Efectis shipped a mobile furnace to Canada and performed several tests on the tunnel walls to determine the fire resistance of the concrete structure.

For the tests the tunnel was closed for traffic and a large trolley with all the equipment was positioned in the tunnel. Two locations on the tunnel wall were chosen for the test. At these locations the furnace was lifted by a forklift and set against the tunnel wall. The local fire department was present as a safety precaution. There was a heat-resistant camera inside the furnace to assess the behaviour of the concrete wall. Temperatures inside the concrete were measured as well. The tests stopped before substantial damage occurred. Both tests were successful and gave information regarding the current state of the fire resistance of the existing tunnel walls. 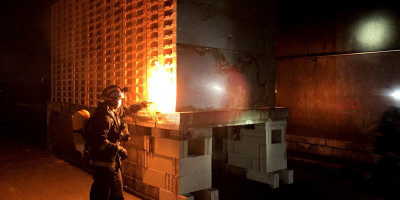 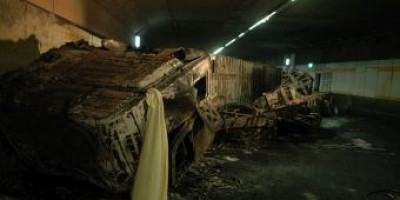