For the construction of the Algiers Metro Line 1 extension B, Efectis was asked to conduct smoke extraction engineering studies for COLAS Rail. The study is realized for the four underground stations that are located at the east side of the existing network, Bachdjarah 1, Bachdjarah 2, El Harrach Centre and El Harrach Gare. As the planned smoke extraction system is focusing mainly on the platform areas, COLAS Rail wanted Efectis to conduct a study of its overall effectiveness.

The underground metro stations are designed using a “cathedral” style with a 120 to 140 meter platform length, consisting of several levels (a platform level, one or two mezzanine levels and a ticketing level) with a height that could be up to 20 meters high.

At the request of COLAS Rail, the study was conducted using the criteria of NFPA 130 Standard for Fixed Guideway Transit and Passenger Rail Systems (critical temperatures and flows, acceptable visibility, toxic gas concentration); and using the methodology proposed by for smoke extraction engineering studies as outlined in the French regulation for public establishments and buildings (ERP).

The first task was to conduct a preliminary risk analysis in order to identify the most relevant scenarios  to examine. For each of the possible scenarios Efectis created, in partnership with the different project stakeholders, the definitions of the following criteria: location and geometry of the fire, nature of fire source, maximum heat flux, kinetic development of the fire, air intake and ventilation, and the response times of the safety devices.

The study considered the ventilation effects of the tunnel system as a whole on how the smoke would be extracted from the metro stations. To do it, COLAS Rail created a 1D model of the underground network using the SES (Subway Environment Simulation) code as a guide.

After validation all of the hypotheses, a 3D model of the underground stations was built from 2D diagrams provided by the project management team. The aim was to create a model of various potential fire development scenario and to understand the conditions that would be encountered by the passengers during their evacuation in the event of a fire.

The analysis of the results provided by the fire scenario modeling using FDS (Fire Dynamics Simulator) code as a guide, allowed for a comparison of the effectiveness of several different smoke extraction methods, in order to propose the most effective safety methods for passenger evacuation. 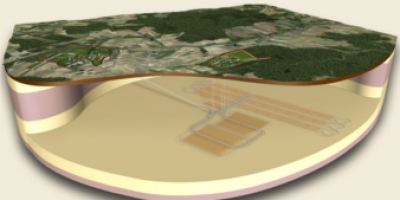